There are 9 salt lakes in Siwa with a total of 55 thousand acres with a depth of 15 meters below the surface of the earth that includes about 60 million tons of rock salt, 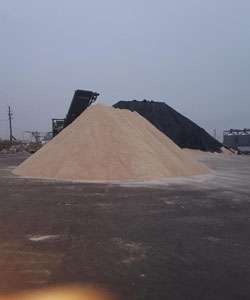 which is considered a national wealth for Egypt,

where these lakes provide a high-quality local product in addition to To the huge export opportunities,

where Siwa salt is considered one of the purest and finest types of rock salt in the world that are used in the process of melting snow in America and Canada.

Egypt’s annual output is approximately 5 million tons of rock of Siwa salt, which varies between :-

The top layer that is on the surface, and also has other materials to sodium chloride such as magnesium and calcium,

It is usually used in defrosting operations where the salinity of rock salt is between 98 to 99.3%,

while the salinity in sea salt is between 95 and 97%, and humidity does not exceed 1%, while it reaches 5% In sea salt,

which makes it abundant in its use to melt the snow of Europe and America in half. Instead of using 7 tons to melt a kilometer of roads, only 4 of Siwa’s salt is used.

and it can be sold as food salt or sold to pharmaceutical companies.

table salt, is a chemical compound known as «sodium chloride»,

found in nature in the form of solid crystals in mines, or in the waters of the seas and oceans,

where it is extracted through the process of «evaporation»

Siwa lakes contain millions of tons of renewable salt, meaning that it cannot be consumed permanently.

Once extracted, it is formed a second time.

What distinguishes Siwa salt is that it does not need any chemical processes to extract it,

it does not need fumigation or putting it in salts,

because it is present in the form of Crystals are easy to extract.

About the Author: admin