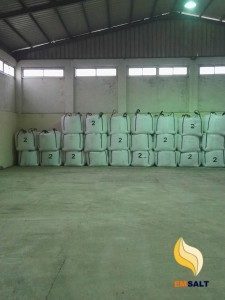 There has been rock salt for a long time, and the variety of useful uses for him on a large scale, and there is increasing demand for rock salt, which prompted the owners of capital to go to invest in the establishment of salt factories, to become in the hands of producers and consumers alike determine the competitive uses of salt.

In the oil industry,

salt is used to increase the density of soil and clay,

which increases the efficiency of drilling operations and makes them safer,

noting that salt is not widely used in offshore drilling.

because it is used in the formulation of capsules and in the production of saline solutions that have extensive secondary uses,

representing a large proportion of the total national salt industry.

Without a doubt, the greatest demand for salt is to be used to remove the accumulated snow on the roads in winter, it can be said that 60-80% of the salt is used by the government to provide safer driving surfaces. Salt reduces the freezing point. Therefore, the use of salt before snow prevents snow formation and accumulation on the roads.

However, the salient use of salt is its intensive use in the chemical industry, especially in the detergent and soap industry.

On the one hand, it has the ability to increase the solubility of water-soluble materials.

salts have a great ability to separate the components of the soap industry,

Used extensively in the manufacture of soap and its derivatives.

On the other hand,

salt also enters the field of solar energy, especially in the manufacture of solar panels,

so where available solar energy, increased the demand for salt, and this occurs mostly in the continents of Africa and South America.

As we have seen, there are countless uses of salt, and applications of salt use are many and many,

which means a great demand for it, and although the salt is not rare and easy to obtain,

the increasing demand for salt over time makes There is a fluctuation in the prices of manufactured salt, especially salt, which is used for security and safety purposes.