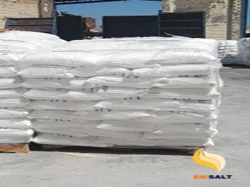 Some may think that soft white salt is the only kind of salt for food, but the fact is that there are many types of edible salt, each with its own unique advantages.

In this article we will talk about an important type of edible salt, it is Kosher salt.

There is no significant difference between kosher salt and normal food salt.

The main ingredient is sodium chloride. However, regular salt or table salt usually contains an anti-caking agent such as calcium silicate or sodium ferrozyanide and iodine,

none of these elements; although some manufacturers sometimes put an anti-caking agent,

but rarely occur, and when this happens, additives are usually much lower than those in table salt.

The most obvious difference between kosher salt and ordinary food salt is grain size only. If you look at the normal salt under the microscope you will see that it has been grinded so that many salt crystals look like small cubes while kosher salt is larger and less processed and retains its random crystalline form.

This difference in size is the direct cause of this designation on the salt of Kosher, and the word “kosher” Hebrew in a proper or legal sense,

and contrary to what some believe is not called kosher salt this name because in itself salt is identical to Jewish law,

Because this large type of salt was used in a process called koshering meat, which is designed to draw blood from meat.

Smaller grains such as table salt are easily absorbed by meat.

This is not the purpose of koshering meat; it absorbs blood from meat and then can be washed without making meat an Impact of salinity.

When using kosher salt in cooking,

we should be careful about what the recipe requires. Is it kosher salt or food salt?

A tablespoon of kosher salt is not equal to the large spoon of salt in weight,

specifically, if your recipe requires one tablespoon of Salt,

you will need to put about a tablespoon and a quarter and a half tablespoons of kosher salt to obtain the appropriate percentage of salinity.