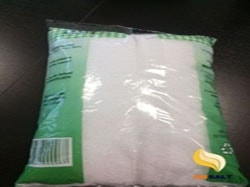 It is the second white poison after sugar but … it seems that no one can do without it.

There is no taste for food without him! What’s the solution?

And what salt do we choose from the types of salt that are available and less harmful than the kind that is heavily present in the markets?

– Rock salt is extracted from salt mines and added iodine because it is free of it.

– Sea salt is extracted from the sea by navigators where the water is dried to get salt.

The problem with ordinary salt we buy from the market is that it is processed by industrial methods.

Most of its useful properties lose any minerals and sodium is left in it,

which causes many health problems if we use it. White table salt also contains harmful additives such as anti-corrosive to make it fast-flowing.

Table salt, made up of 98.5% sodium chloride, is a chemical product, and most of the food ingredients are extracted from it.

It also contains aluminum in several forms and this is associated with Alzheimer’s disease and other problems in the body. this kind of salt does not actually exist naturally if we put a fish in salt water, it dies.

It is also free from many minerals that the body needs, so it is wise to avoid it. If you are using this salt at home, you should get rid of it directly, or use it in cleaning and dealing with stains. It is important not to be used as food.

As much as table salt is bad, real salt is healthy, necessary and good.

While the regular intake of refined table salt is associated with diseases and health problems, we throw newborns into the brine.

For a person who does not get the amount needed for daily consumption of water alone, it must contain a careful balance of minerals including salt.

This may seem a little strange,

the benefit of table salt:

The relationship between the amount of salt consumed and cardiovascular problems has been faced with a lot of scrutinies recently.

At the same time, researchers believe that there is a link between the consumption of salt and insulin resistance,

and, as is known, high blood sugar causes many problems.

Salt (and minerals found in natural salt types) is essential for proper moisturizing.

There is a widespread belief that salt intake is related to longevity or shortness.

This belief is the result of research conducted on a comparison between the American and Japanese populations,

where research shows that the American intake of salt is 3700 mg of sodium per day,

which is considered a low quantity, Are suffering from high blood pressure and heart disease,

while the Japanese, the world’s most populous, consume 4650 mg per day of sodium, but are less likely to develop heart disease than the rest of the developed world.