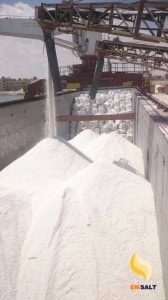 Deicing Sea Salt coming from North Sinai has an ecological and natural advantage.

as well as the good soil,

which is far from the sources of pollution of all types of industrial, agricultural and health,

Which is based on the sea in the salt deposition,

is concentrated in the range of Lake Bardawil, a source of clean and renewable water.

The salt produced from Sabikah bay in El Arish and the rest of the northern Sinai region enjoys high purity.

The governorate has an ecological and natural advantage.

Its beaches are exposed to sun brightness throughout the year, as well as good soil, which is far from pollution sources.

Sabikah bay salt is one of the most famous bay salts in the Arab Republic of Egypt.

This bay salt is located west of El Arish. As a result of the pure environment of Sinai and Arish in particular,

the salt from Sabikah bay salt is one of the purest salt in the world,

above all Characteristics of salt is used at the commercial level, where the luxury table salt is produced to be exported to the Arab, African and European markets.

It is worth mentioning that the average production of Sabikah bay salt is about one million tons annually of the best salt in the world.

therefore the large part of it is exported through the port of Arish and Damietta and the rest is distributed locally.