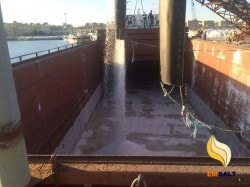 Sodium chloride is the largest dietary source of sodium. Salt and sodium are often used interchangeably.

Salt consists of 40% sodium and 60% chloride by weight. Some salt species may contain small amounts of some Minerals,

calcium, potassium, iron, zinc, and iodine are often added. Sea salt is defined as the salt obtained through direct evaporation of seawater and is usually not subject to the process of table salt. Therefore,

it maintains higher levels of magnesium, calcium, potassium and other nutrients, but it has the same levels of sodium as table salt. Sea salt is popular in restaurants and supermarkets. Many gourmet chefs say they prefer table salt to its rough texture and strong flavor.

Sea salt provides many health benefits, especially for some species such as Dead Sea salt, Celtic Sea salts, Himalayan salt, and some of these the benefits:

– Helps to avoid dehydration and maintain the balance of body fluids: While increasing the salt in the body may lead to the retention of fluids, the lack of salt leads to lack of fluids in it, which can lead to drought,

– A good source of electrolytes. Sea salt can contain many major electrons, such as sodium, magnesium, calcium, and potassium,

which are essential for the health of the body.

Electrolytes have many important functions such as a pacemaker , And control of muscle contraction.

table sea salt moderately can help reduce the risk of electrolyte imbalance in the body, which can lead to many serious symptoms, which can be fatal in some cases.

– Maintains the integrity of the muscles, brain and nervous system: It is necessary to maintain the levels of sodium in the body because of the great importance in the process of transmission of nerve signals to ensure the work of the muscles and brain to the fullest.

– Helps to treat psoriasis: According to the National Psoriasis Foundation, Dead Sea salts help break down thick plaques from the surface of the skin,

allowing sunlight to target the inflammation below. Dead  salts are distinguished from other salts Containing chloride, magnesium, sodium, potassium and calcium salts 20 times greater than other salts. Some research suggests that the combination of Dead Sea salts and sun exposure is the best treatment for psoriasis.