Extract salt from the sea

Extract salt from seawater is a method known since ancient times for drilling shallow ponds connected to the sea by short channels.

wide areas, a small depth and a suitable amount of water can absorb large amounts of sunlight.

The basins are filled and the channels are closed, The sun works to evaporate the water.

The water evaporates leaving the salt behind and making the remaining water more saline. Eventually, after enough water has evaporated, a layer of sea salt crystals can be left behind. 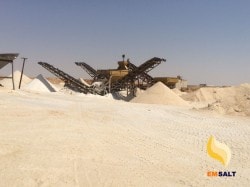 typically a number of these ponds concentrated in a specific location separated from each other by dams.

One of the most important factors that must be taken into account in such a process is timekeeping. Rainfall in untimely time can ruin the harvest of days of evaporation. So in some evaporation places design a huge indoor door to the pond called pans, so as to protect against the fluctuations of the atmosphere.

Methods of extraction of sea salt in different countries

extract salt is not extracted on one image in different countries in Austria, for example, they were digging the ground into the depths of the deep until they reach the minerals where it is in the form of a very thick layer Vjfrun where rooms resemble and fill with water and melt a large part of salt To the surface of the earth and put it in the boiler on the fire and the water spills and the salt remains in the form of crystalline grains.

France use an easier way than they did to extract salt ,They dug into the ground containing the salt in its interior. They dug wells to reach the salt layers and then filled the wells with water. The salt dissolved in that water was extracted and boiled in water tanks until the water evaporated.

In the Arab countries

, the salt is produced by the simplest means. There are shallow, shallow basins called salt, which are filled with seawater in the summer. They are left in the summer until they are deposited in the nearby ponds and left behind, The water from these ponds is affected by the temperature of the normal air.

The basins are separated by bridges. These ponds are fed by seawater by private streams or wells,

These ponds lead to other ponds where the solution is concentrated and the salt is deposited into the evaporation process and then discharged.

Water after salt deposition Salt is formed by the bulldozers, which are used in industry and either salt

Food is refined in special plants.