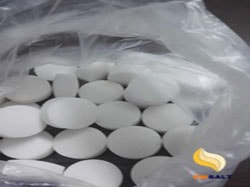 Water is a fundamental element for any organism in life now over, it plays a principal role in industrial life nevertheless it’s size or type.

It is well known that water resources are rain, underground water and the water of the river. • All these water resources contain lots of salts which it’s hardness is like Calcium and Magnesium Carbonates and bicarbonate’s hardness. *Such hardness causes many problems to the industrial processes, particularly with steam boilers. • Thanks to the modern scientific-technological researches and experiments, science has reached a solution to soften the hard water by using ions exchange method for both of Calcium & Magnesium exist in this water with sodium by using natural or industrial resins, thereby soft water which is soluble for various purposes

• Since resin is naturally water insoluble on one hand and easy with ions exchange on the other, this property has been used in decreasing resin cost by reactivating it.

, i.e. reactivate it’s potentials to perform it’s cation exchange characteristics through an interaction with an economic element such as salt ( sodium chloride ), therefore we can prolong resin’s life for a longer period and such period depends on many factors the most important of which is the purity degree of the used salt after which resin reactivate with as less cost as possible :
-CaR + 2NaCl (with excess) CaCl2 +Na2R
-MgR + 2NaCl (with excess) MgCl2 +Na2 R
• Keeping in line with the scientific advancement that served the plants using resins water treatment units.

salt pellets produced according to the updated world specs that cope with the purpose of use for the resins reactivating process.

used for water softening in the industrial companies, electricity & steam regeneration stations or in the deluxe hotels.

*Why is tablet salt the best?

• Salt pellets ( Sodium Chloride ) are preferred in resins re-activation process since it has a significant property such as :

1- Sodium Chloride is the only salt which does not cause troubles to the water or to the resin during the exchange process as that ammonia and potassium do.
2 -Chlorine does not form precipitations with ammonia or magnesium.
3- Sodium chloride is chemically inactive and has no side effects on the resin
4- Sodium chloride does not cause environmental pollution.
5- It is available in high purity degree and suitable price.
6- Has an optimal size and form for the reaction. 7- has a constant property.
8- Has an efficient influence on decreasing water treatment costs.
9-Prolongs resin’s life.
10- Has high volumetric density.
11- has an easy flow property.
12- Easy in handling – ( Transportation & storing ) .

About the Author: admin